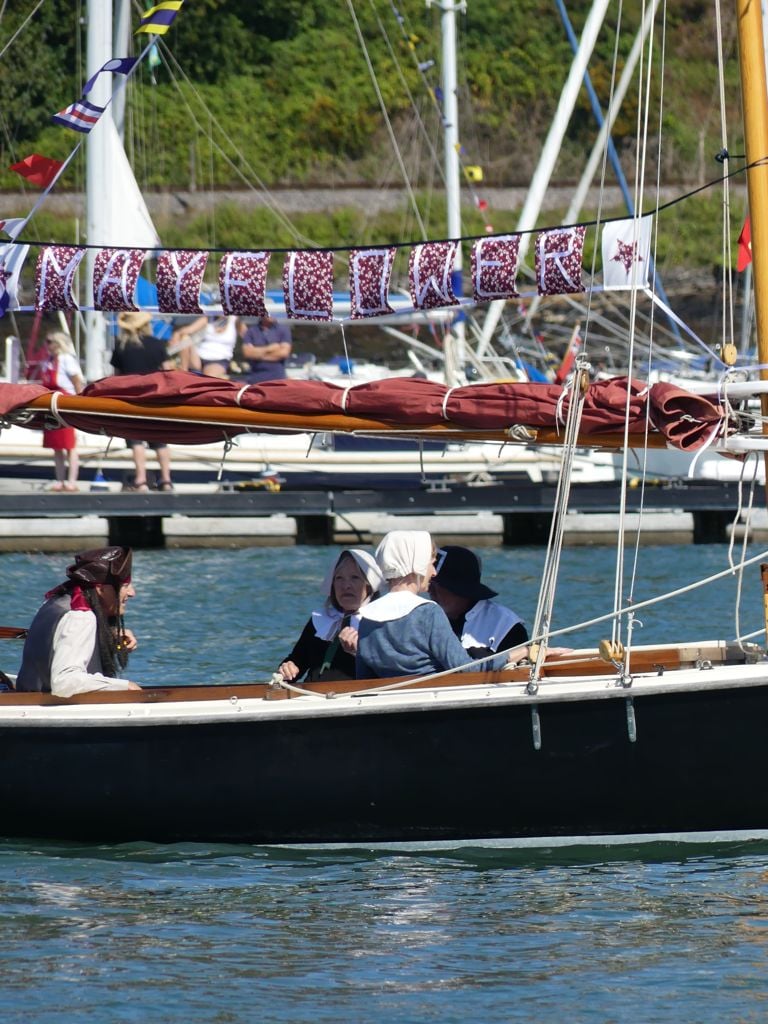 As part of the Port of Dartmouth Royal Regatta’s programme the Mayflower River Parade had over 71 vessels participating.

The parade was led by one of the 24 Classic Craft entrants, the Pilgrim of Brixham, who Dartmouth Mayflower 400 have funded several days out for young people over the past three years. The elegant Inisiaig was present, a 55ft wooden TSMY and White Mouse, Philip 50 TSMY both built at Noss, the home of our sponsor Premier Marinas.

Our special thanks go to Premier Marina, Noss on Dart and Andy Osman, General Manager; without their sponsorship this event would not have happened. Andy’s team also supported the marshalling.

It was a parade of variety joined by many of our local rivers users with their Motor launches, Yachts, Cornish crabbers, Shrimpers, Steam Boats Pioneer and Clio, along with Halcyon with some great sound effects.

On the river, Tim Dewing, part of the Dartmouth Harbour Board, marshalled our participants into the order of sail and liaised with the various groups in the DM400 team. One of our resident Dartmouth yacht owners and ex-Royal Navy, Tim was well placed as our point of contact throughout the Parade to set this amazing spectacle on its way.

Costume highlights include Cacique, Quintet and Ellanore, not to mention the Torbay Sea Scouts performing a sharp display of YMCA on the Terry Too! This was captured by the media team alongside the film of the event. We give thanks to Jack from Nomad Marine who supplied and manoeuvred the Media Rib for our Media Crew Matt & Connor and Emily on shore from Skyflicks. Supported by Lucy Edbrooke on Social Media streaming from the Rib and the Discover Dartmouth team for Social Media support. Our shoreside photographers include Amelia Wright, Ian Snell & Sam Fradley.

Some impressive salutes were displayed including Amelia giving a full Naval solute in costume winning the Best Salute and Patsy claiming the Classics Grockle Cup. The amazing eco-friendly ‘EnviroFlags’ battle flags and burgees were sourced and created by Micky Cox from Boomerang Marketing. Thanks go to Dartmouth Yacht Club Volunteers who were handing out Burgees and Battle Flags for 4 days! Special thanks to Jenny who came in on Saturday too!

A special commendation to the crew aboard the Naughty Girl dressed in all matter of inflatable costumes, including Unicorn, Pterodactyl, Penguin, Walrus, Duck, Crocodile and a yellow submarine.

It was Dart Sailability who just beat them to the Best Dressed trophy with a Thanksgiving range of Pilgrim and Native American costumes and included an inflatable Turkey!

Special thanks to Richard Glass and his team of glass blowers from Teign Valley Glass who created the amazing trophies for ‘Best Dressed’ and ‘Best Salute’, alongside plaques created by Karen from Dartmouth Engraving and our VIP guests who judged and presented the awards.

The Mayflower River Parade was greatly supported by vessels and crew from the RNLI and the Habourmaster and his team at DHNA.

Led by Dartmouth Mayflower 400 Director & Tourism Consultant, Laura Campbell, working with Kate Brown from Dartmouth Yacht Club who pulled together all the information submitted by our Classic Craft participants and commentated on the day, supported by Ann Irish, monitoring changes to the line-up. In addition, Olivia Williams, an Exeter University Intern who has spent the summer working with Laura assisted in the organisation and administration of the event, supported by Discover Dartmouth for the social media coverage.