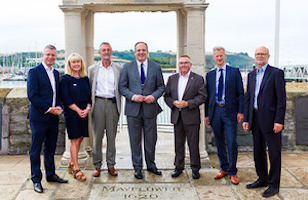 The Government has announced an additional £250,000 grant in support of the UK-wide Mayflower 400 commemorations, to mark the 400th anniversary on 16th September 2020 of the Mayflower sailing.  The full text of the Press Release is as follows:

The funding will be used to promote and encourage American visitors to join the anniversary in England and to develop a ‘digital Mayflower trail’ which will bring to life individual stories, heritage and culture of each location involved in the commemorations. This is expected to be launched in November 2019.

Plymouth is leading a national partnership of 11 destinations within England which are currently developing a year-long programme of cultural events and activities as part of the anniversary. Plymouth itself is undergoing a major transformation that will bring in commercial and cultural opportunities to the city on a scale not seen since its rebuilding after the end of the Second World War.

The Mayflower 400 commemorations will form the main part of a wider, year-long national and international cultural programme connecting England, the United States, the native American Nation and the Netherlands in the four-nation commemoration.

The announcement follows a recent visit to Plymouth’s historic waterfront area by Michael Ellis, Minister for Arts, Heritage and Tourism, where details of the cultural, maritime, military, heritage and sporting programmes and events were presented to him.

“I was delighted to recently visit Plymouth’s Mayflower Steps, to meet those working on the commemorations, which will celebrate centuries of shared UK and American history and promote Plymouth to the world in 2020. Anniversaries such as Mayflower 400 play a vital role in proving that the UK is open for business.
This has the potential to have a similar effect on the city as the UK City of Culture 2017 had in Hull, and will have on Coventry in 2021. That’s why we fully support the commemorations, which will play a major part in ensuring a strong legacy for Plymouth as a tourist destination”.

“Plymouth has a long and proud global heritage, I am excited that our city is leading a national and international partnership to commemorate the world changing endeavours of the Mayflower Pilgrims. It’s great to get this additional financial commitment from national government for Plymouth and the UK partners.”

“We are delighted that the Government has recognised the opportunity that Mayflower 400 presents not just in 2020 as part of the main anniversary commemoration but the legacy that can continue as the whole East coast of America turns 400 over the next ten years.”

Over 25 million Americans are descended from the passengers and crew of the ship, including five previous American Presidents. We are very thankful of the support from VisitEngland, VisitBritain and our wider partnership in helping us to make the most of this exciting anniversary.
The Mayflower left Plymouth on 16 September 1620 (according to the Gregorian calendar), arriving 56 days later on 11 November in Cape Cod on the East Coast of the United States. Approximately 35 million Americans today trace their ancestry to a Mayflower passenger.

Initiatives that encourage tourists to travel beyond London and see what the whole UK has to offer are a key focus of the Government’s Tourism Action Plan.