Town Trail: A walk through Dartmouth in 1620

Dartmouth of 1620 is all around you. Although sometimes it hides under your feet or behind later building fronts, much from that time has survived. Using a map of the town drawn the year before the Mayflower and Speedwell called into the port for repairs, this walk will enable you to build up a picture of Dartmouth at that time. Some highlights from Dartmouth’s earlier and later history are also included.

Although the pattern of Dartmouth’s streets has changed little since 1620, the waterfront has changed quite a lot. If the ground you are standing on is flat, it has been reclaimed from the river at one time or another.

The trail begins at the Visitor Centre, which stands on ground reclaimed from the river in the 19thC. In 1620, ships moored here. The nearby church commemorates John Flavel, a Puritan preacher and writer, well known in England and America in the 17thC.

2.The Quay and Fairfax Place

To further develop Dartmouth’s trade, a new quay was built here between 1570 and 1640. New houses were built along it by leading members of the town. The house on the corner is a good example of a 17thC Devon town house.

These merchants’ houses, now called the Butterwalk, were built between 1628 and 1640, on reclaimed land. They backed on to the river and ships came up to the back door. Today Dartmouth Museum occupies two of them.

In 1620 this area was the Mill Pool, originally a tidal creek. A dam across the creek allowed the tide to be used to power a mill, which operated until around 1800. The Market was built in 1828 after the pool was drained.

In 1620 this was an important meeting point. Roads led from here up the steep hill to the parish church of St Clement’s and out of the town; west along the edge of the Mill Pool; east along the river’s edge to the shipyards of Hardness; and south into Clifton.

Foss Street marks where the dam across the tidal creek used to be. John Roope, who owned the mill in 1619, wanted to stop people walking over the mill drawbridges. Maps drawn for the legal case clearly show the town’s appearance at the time of the Mayflower’s visit.

The church of St Saviour was consecrated in 1372. It was built by the townspeople, who wanted a church in the centre of the town, and over the centuries they endowed it with many beautiful features. In 1620, refurbishment was underway; the porch was rebuilt that year.

This was the heart of medieval Dartmouth. The pillory was located here with the stocks. In Higher Street here are two fine 17thC houses; further along is the Cherub, one of the oldest town houses in the southwest of England.

Up Chapel Lane is the old Baptist Meeting House (now a private house). There was a Baptist community in the town by 1646. Thomas Newcomen, inventor of the first successful working steam engine, was born in Dartmouth in 1664. He was a Baptist preacher.

Lower Street and Higher Street above it were originally both very narrow. In 1864-8, to enable wheeled traffic to pass through the town, many old houses between these were

In 1620, Lower Street contained many old houses. Bayards Cove Inn is a rare and relatively well-preserved survival of a 17thC “gallery and back block” house and the stone walls may be 14thC. The position shows how narrow the old streets used to be.

By tradition, the Mayflower and Speedwell lay at anchor here during their ten-day stay in Dartmouth. Shipwrights from Dartmouth may have helped with repairs to the Speedwell, which was leaking badly. Several houses along Bayards Cove quay date from the 17thC. 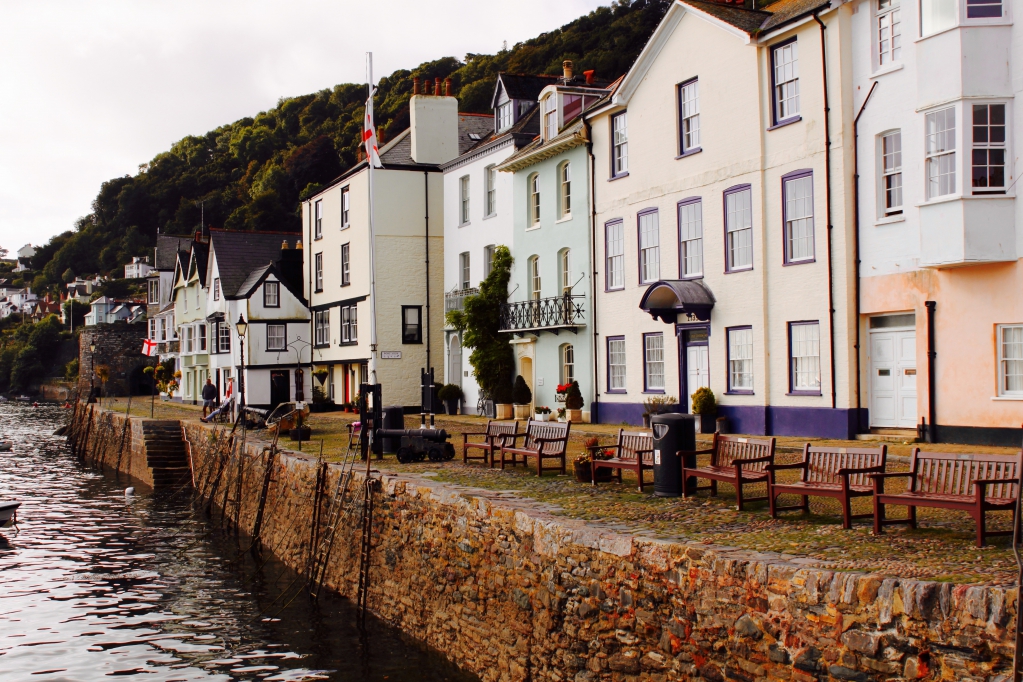 Now a lovely riverside walk, the Embankment was built in 1882-5 for larger ships to come to Dartmouth. In 1620, Dartmouth’s mayor, John Plumleigh, lived here.

‘Pilgrim:New Horizons’, a new sculpture situated on the South Embankment

Further along the Embankment is a new Sculpture of a figure representing a Pilgrim looking out to sea, which has been created by sculptor Mark Gregory with Dartmouth Academy students and Nicola Perrott. It has been under planted with grasses.

The trail ends at Coronation Park, opened in 1937 to mark the coronation of George VI, the present Queen’s father. Before the ground was reclaimed, Coombe mud flooded with the tide, and there were boat-building yards here.

Now return along the Embankment to the Visitor Centre.

In 1620 there were several ship building yards here. A survey taken in 1619 names 40 shipwrights and 14 “coopers for the sea” working in Dartmouth. Perhaps some of them helped to repair the Speedwell.

*We are supporting the businesses in Dartmouth by adding links to this part of the Trail. Please let us know if you have a business to add.